The Margate-based story of struggle and strife… and stand up comedy.

Between being bullied at school, put upon by her overbearing boss at the local arcade and having to look after her younger brother, sister and manic-depressive mother, life isn’t easy for Sarah Taylor. However, when Sarah’s drama teacher channels her ferocious and volatile energies in to a stand-up comedy routine for the graduation showcase, Sarah discovers that she may have a hidden talent. As her love for comedy grows and the showcase draws nearer, the delicate balance in her life becomes increasingly difficult to maintain. Little by little the walls start to close in, ultimately forcing her to choose between her responsibilities as a carer and her newfound passion for comedy. 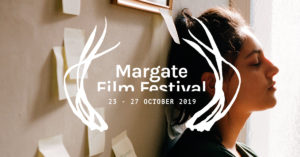 + ‘Signs’ (20min) by Yero Timi-Biu: a coming-of-age drama about a teenage carer coming to terms with the responsibility of looking after her family after a distressing incident.

BOOK TICKETS
Back To Top
×Close search
Search
This website uses cookies to improve your experience. If you continue to use the site, we'll assume you're ok with this, but you can opt-out if you wish. Accept Reject Read More
Privacy & Cookies Policy